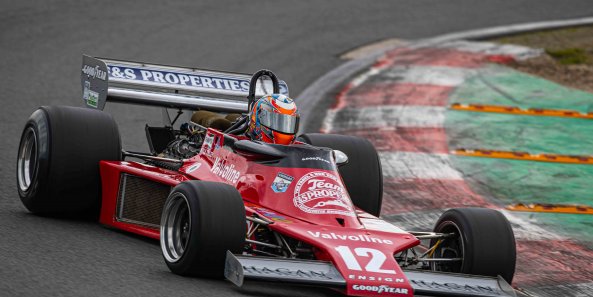 On a very wet Zandvoort, Kyle Tilley won from the front to take the spoils in the first FIA Masters Historic Formula One race at the Dutch venue. The Ensign N177 driver's main challenge faded on lap 2 when Henry Fletcher went off at Tarzan corner, the suspension of his March 761 having collapsed.

**?I was relatively confident that I would be alright. I love racing in the wet", said the American-domiciled Briton. ?This was my first time to Zandvoort, and I love it, it's a great little track. I was looking forward to fighting Henry ? we were team mates in British GT and Britcar years back ? but it wasn't to be. And thanks to James for lending me his car. With a Dutch sponsor on the car winning at Zandvoort in the Ensign is cool."**

At the restart after the safety-car period required to salvage Fletcher's car, Chris Perkins took second in his Surtees TS16, passing both Jason Wright (Shadow DN8) and James Hagan (Hesketh 308), but was repassed by Wright on lap 7. When Perkins looked like losing third place by incurring a 10-second time penalty for what turned out to be a jumped restart, Hagan dropped back to eighth suffering from gearbox maladies.

**"I compromised my race by not knowing the rules!" said Wright about getting jumped by Hagan and Fletcher at the start. ?I did get back at Chris, and then got James back ? that was my best move."**

**?Thanks to FIA technical delegate John Hopwood for explaining the safety-car-restart rules", said Perkins, ?but I still messed up the second one! But I loved racing the Surtees again, it was like putting my shoes on."**

This left Vincent Rivet's March 811 in fourth but 11 seconds down on Perkins, while Bob Blain (March 761), Ian Simmonds (Tyrrell 012) and Georg Hallau (Theodore N183) fought tooth and nail over fifth, and finishing in that order. Rivet, Simmonds and Hallau claimed the post-78 honours of a race that started without championship leader Matteo Ferrer.

**?Horrible, it was so greasy", said Simmonds. ?I had a nice fight with Bob Blain. He got past me, and then I was trying to get past him ? but he wouldn't give me a lot of room?"**

The race got underway with three cars missing on the grid ? and some of the most important ones too. In qualifying, Andrew Haddon's Hesketh 308C lost its engine, and no lesser man than championship leader Matteo Ferrer was the first to arrive at Gerlach corner where the Hesketh had dropped a copious amount of oil. The Italian was a passenger, and his French car crashed backwards into the tyre wall. Then, moments later, Michael Lyons' McLaren M26 was off too at Slotemaker corner.

On a wet track, Jason Wright lost ground to James Hagan and Henry Fletcher on the first lap, and soon Fletcher got up into second place behind the leading Kyle Tilley. In the meantime, Paul Grant had retired to the pitlane in the oldest car on the grid, the De Tomaso 505/38. Making up ground on Tilley with fastest lap, Fletcher was looking at passing the leader when his March 761 ended up beach in the Tarzan gravel trap. This required the arrival of the safety car.

It took two laps to clear Fletcher's machine, and then Chris Perkins was right on it at the restart, passing both Wright and Hagan for second place. On lap 7, though, Wright was back into second place and moving away from the Surtees. Behind Hagan in fourth, Vincent Rivet in the March 811 had moved up into fifth, ahead of Bob Blain's March 761, Ian Simmonds in the Tyrrell 012 and Georg Hallau's Theodore N183, the three all fighting over sixth place.

Perkins' demon restart had been a bit too quick, it transpired, and the Surtees driver was penalised with ten seconds added to his race time. But right at the moment that was announced, Hagan disappeared from the order to reappear in eighth place, as Perkins led now fourth-placed Rivet by 11 seconds?. After the race, Hagan explained that he had lost both third and fifth gear but was happy to take eighth for the reversed-grid pole.

At the front, Tilley took a convincing win ahead of Jason Wright and Chris Perkins, Rivet indeed finishing 11 seconds down to not hurt Perkins' place on the podium. Blain, Simmonds, Hallau and Hagan completed the top-eight, the Irishman despite his setback ensuring pole position for the second race on Sunday. 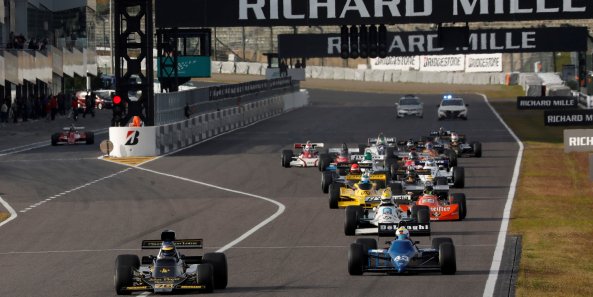 Thornton takes a double victory at Season Finale in Suzuka 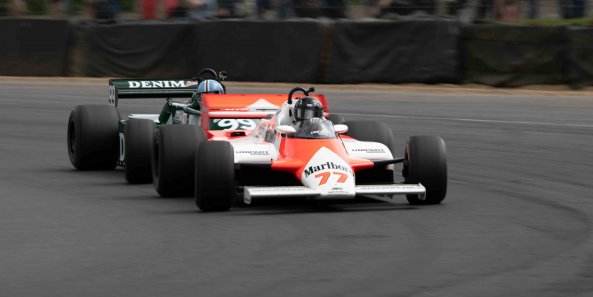