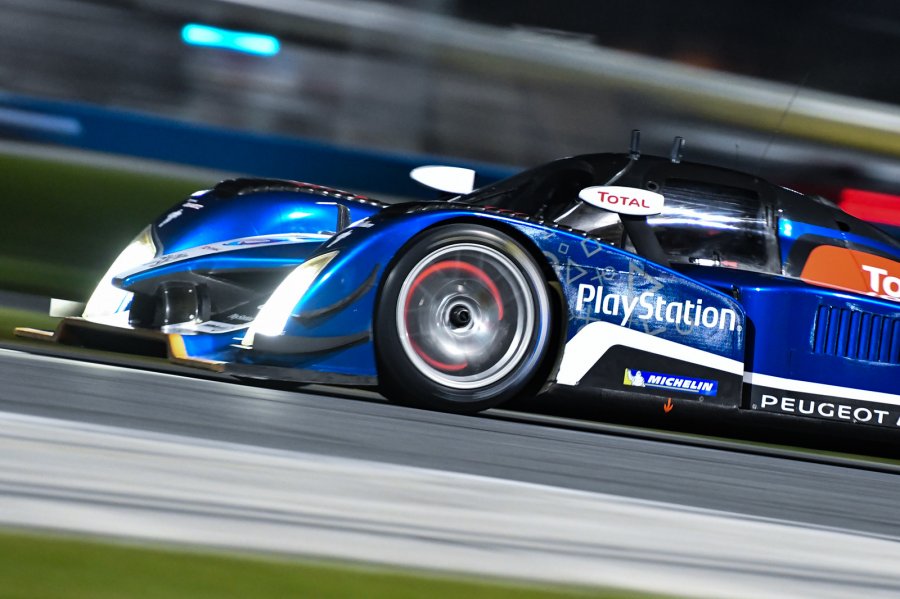 Masters Endurance Legends and Group C&D driver Christophe D’Ansembourg sat the race out in his Dallara Oreca LMP in favour of Jonathan Kennard who took full advantage of his freshness to set fastest lap by a good margin and bringing the car home fifth.
After 3 races and one to go, D’Ansembourg stands 3rd overall with a nine second advantage over 4th.

Stunning drive in Group E by David Porter in the Peugeot 908. From second on the grid he leaped into first at the green only to have the advantage blunted by a full course yellow on the second lap. After briefly slipping to third after pitting under yellow, he began a series of ever increasingly fast laps. Porter eventually set fastest race lap on lap 20 and finished second, a scant few seconds behind pro Andy Wallace. Right behind Porter with a solid 4th place drive was Jamie Constable with his 2011 Pescarolo LMP and Travis Engen in the Audi R8 LMP took 6th to put three Masters drivers in the top six. Ray Evernham pushed the Audi R8 LMS hard to 15th spot and sadly the 007 Aston Martin Vantage GT3 retired for the second race in a row due to splitter damage. Driver Marco Werner complained of vibration so bad he couldn’t see properly.

The cold slick mist returned to the circuit just before dawn causing numerous yellow flags and generally causing headaches for all but the most experienced pilots in Group F. All the more impressive than for Masters Endurance Legends driver Robert Tornello who partnered with Danny Clos to snare a strong second place in his Daytona Prototype. Tactics played a role as multiple yellow periods had teams pulling different pit strategies trying not to get caught out.
The remaining Masters drivers finished as a fairly tight group with Mike Furness in the Courage LC75 taking 15th less than two seconds from Chris Atkinson’s Oreca FLM09 in 16th and a further seven seconds finding Martin Lauber in 17th. The last two Masters cars unfortunately didn’t make the chequered flag. The Ligier JS/P3 of Kyle Tilley had a lawn mowing expedition due to the greasy conditions and could not be extricated in time. The Oreca 03 LMP2 of Robert Blain came very slowly into the first yellow flag inspired pit stop and decided to park the car there and then due to the very difficult conditions.