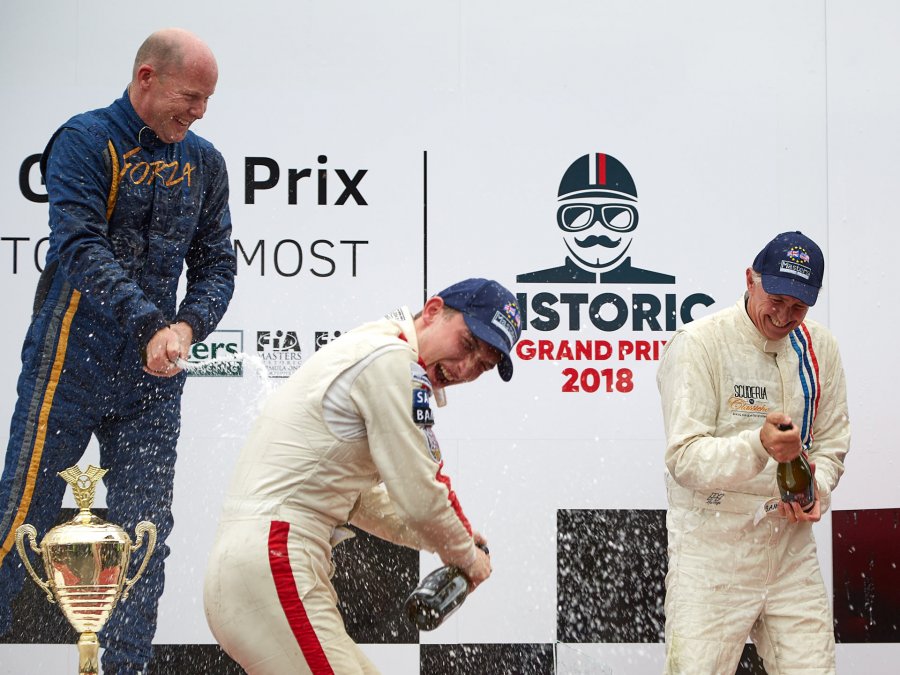 Nick Padmore completed the double by also winning the second FIA Masters Historic Formula One race of the weekend at Most. Charging up from eighth on the reversed grid, the Williams FW07C driver was third on lap 2, and then took two more laps to find his way past pole-sitter and team mate Max Smith-Hilliard (Fittipaldi F5A), who went on to win the pre-78 class.

It was awesome!” said Padmore about picking his way forward. “You know I did all my overtaking on the exits of the corner? I just used my traction, and everyone was paying attention.

In an entertaining race that after five laps of running saw the top-eight still covered by just three seconds, yesterday’s second-place man Matteo Ferrer (Ligier JS11/15) took more time to get to the front. Taking one car each lap, the Italian – a rookie in Historic Formula One – eventually passed Smith-Hilliard for second on lap 11.

It was difficult”, said Ferrer. “It was about picking my time, being patient, not rushing it, there was enough time to the end of the race. Yes, I was closing on Nick at the end, but he probably didn’t feel the need to push anymore.

Once Padmore was out in front, he swiftly opened up a four-second gap to Smith-Hilliard, and increased that to seven on the next lap, but amazingly, the gap to Steve Hartley’s Arrows A4 in eighth place was still only ten seconds.

On lap 8, the midfield battle got so close and intense that Katsu Kubota and Andy Wolfe had a collision which took the Shadow out of the race and caused a puncture to his own Lotus 91. The Japanese driver was disqualified from the results afterwards.

Kubota and Wolfe disappearing in front of him and the ensuing safety-car period helped Greg Thornton move up a couple of places and make up for lost ground. When the Lotus 77 driver on lap 13 dealt with Jamie Constable – who took his first post-78 podium with his newly acquired Tyrrell 011 – Thornton pressed on to give Smith-Hilliard a run for his money. Even though they were covered by a mere two tenths on the finish line, MSH hung on to claim pre-78 class victory.

I hung for dear life!” said Constable about his race in the middle of the pack. “I was catching them, they were catching me – it was a full-on race, it all disappeared in seconds!

“I was disappointed at the safety cars”, said Max Smith-Hililard about losing his cushion to Thornton. “It bunched everybody up, and then two or three laps before the end, there’s Greg in my mirrors! I was glad to see the chequered flag…”

“A bad time for safety cars!” Thornton agreed, but for different reasons. “By the time I got to him…”