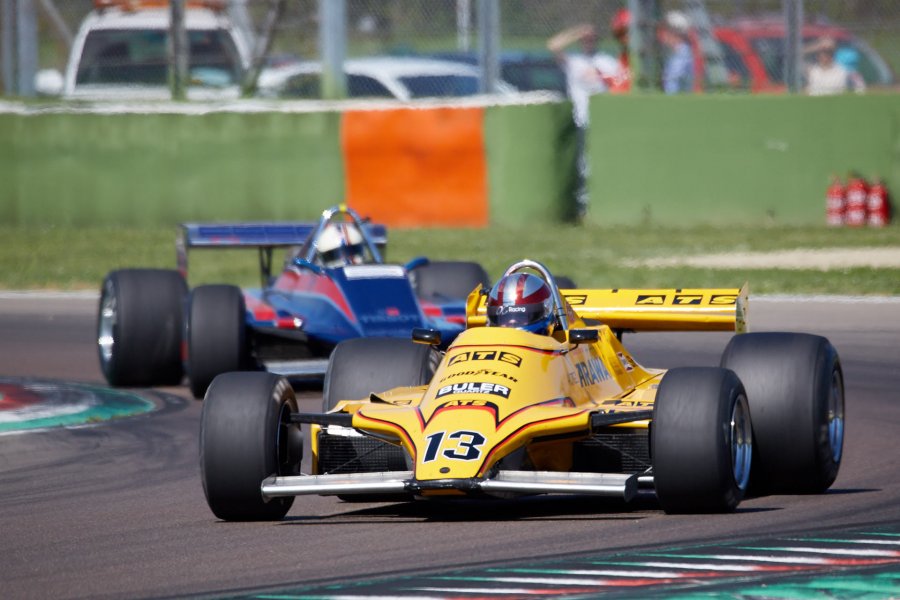 Martin O’Connell took revenge for his mishap in the first FIA Masters Historic Formula One race of the Motor Legend Festival weekend at Imola by fighting his way forward from 21st on the grid to take Marc Devis’ ATS D4 to a spectacular win.

The former British Formula 3 National Class champion put his single-seater savvy to good use to be 12th after the opening lap, and sixth after 2 laps. A short spell behind the safety car dispatched for the retrieval from the gravel of Vincent Rivet’s March 811 was followed by O’Connell jumping both Greg Thornton (Lotus 77) and Christophe d’Ansembourg (Williams FW07) at the restart. One lap later, the ATS surged past Jamie Constable’s Shadow DN8 to take second place.

Meanwhile, from second on the grid, Steve Brooks (Lotus 81) drove a very strong race, leading until lap 9 after inheriting the lead on the opening lap when pole man Patrick D’Aubréry wildly spun his March 761 on the climb up to Tosa. Having valiantly defended first position for three laps, the Classic Team Lotus driver had to finally give in to O’Connell on lap 7 but stuck with the ATS in the four laps remaining to the finish. Brooks eventually crossed the line just a couple of seconds down on the winner.

Christophe d’Ansembourg (Williams FW07) produced a steady race to claim third, profiting from a clash between pre-78 class rivals Jamie Constable (Shadow DN8) and Greg Thornton (Lotus 77) that dropped both of them down the order. Their places were picked up by Joaquin Folch (Brabham BT49) and race 1 winner Mike Cantillon (Williams FW07), the latter having spun on lap 2 and on his way up again until Folch halted Cantillon’s progress. Manfredo Rossi (Lotus 80) was a brief second after two laps but failed to keep pace with the top-five. The Italian finished sixth.

Pre-78 class winner Constable kept Brooks honest in the opening stages but then saw his class rival Greg Thornton pass him on lap 6. Contact one lap later lost both of them places, Thornton eventually finishing well down, fifth in class.

Thornton’s demise helped Jason Wright (Shadow DN8) into second place in class while fellow Canadian Keith Frieser (Shadow DN1) picked up third. Frieser had been ahead of Wright before the latter made the pass on lap 8. Squeezed in between Constable and Wright was Andrew Beaumont’s Lotus 81 in eighth overall.

Also starting from the back, Steve Hartley was up to seventh by lap 8 but his weekend of horror continued when he pulled his Arrows A4 into the pits one lap later.