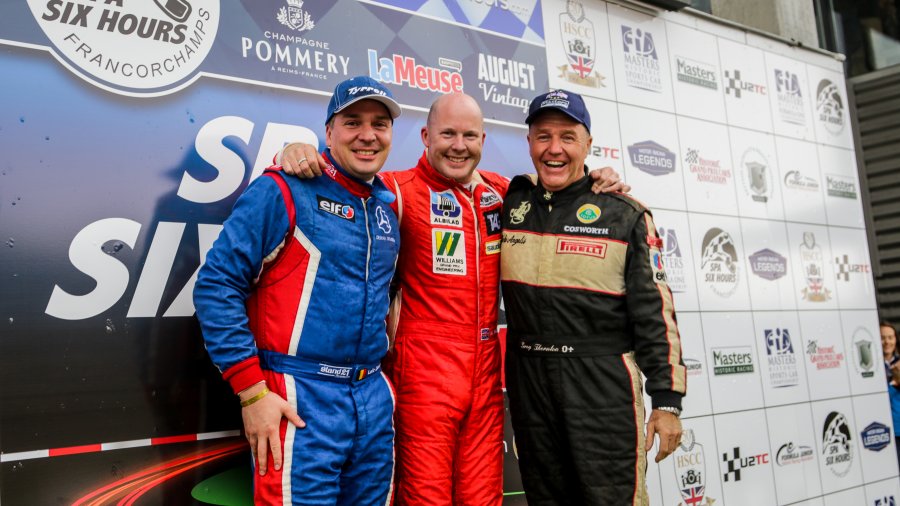 Nick Padmore and Loïc Deman put up a great show in the second FIA Masters Historic Formula One race at Spa by battling it out for the entire race. Deman led for 9 laps, with Padmore’s Williams FW07C climbing all over the back of the Belgian’s Tyrrell 010, before the Briton swept past when Deman was head up overtaking a backmarker. This gave Padmore his 12th win of the season.

It was like a Formula First race!” said Padmore, still excited after his hard-fought win. “I was so much quicker than him on the Kemmel straight, but I couldn’t find a way past. I was waiting, and waiting, hoping for traffic. Then Frank [Lyons] held him up, and I just went for the gap.

“Frank Lyons didn’t see me, unfortunately”, said a despondent Deman, “and then Nick was gone… He was a bit quicker than me, so it was very hard to keep my position. But I’m still happy, and I’ll be back at Jarama to try again!”

Behind the leading pair, Greg Thornton (Lotus 91) and Christophe d’Ansembourg (Williams FW07C) fought over third place lap after lap, Thornton finally passed the Belgian on lap 9 – not a good lap for Belgians, since that was the same lap that Padmore swept past Deman. Earlier on, before claiming the final podium position, Thornton was continuously made to fight for fourth place, first by Steve Hartley (Arrows A4) – which ended in heartbreak for the latter – and then by Paolo Barilla (Williams FW07C), the Italian having fought his way up to fifth after passing Mike Cantillon’s Tyrrell 010 and Simon Fish in the Ensign N180. Barilla claimed fourth when D’Ansembourg began to slow in the final two laps.

In eighth overall, Max Smith-Hilliard (Shadow DN5) won a tight battle with team mate Jamie Constable (Shadow DN8) to take the pre-78 class. The two Shadows were never more than one second apart, and then touched while braking into the Bus-Stop chicane a couple of laps from the end. Smith-Hilliard’s DN5 was momentarily on two wheels before resuming its trajectory. Both survived the clash but then Constable lost time on the final lap when he found that his front wheel was loose. This gave Dave Abbott (Arrows A4) ninth place overall. Constable crossed the finish line to still take second in class, with Jason Wright in the other Shadow DN8 completing the pre-78 podium.