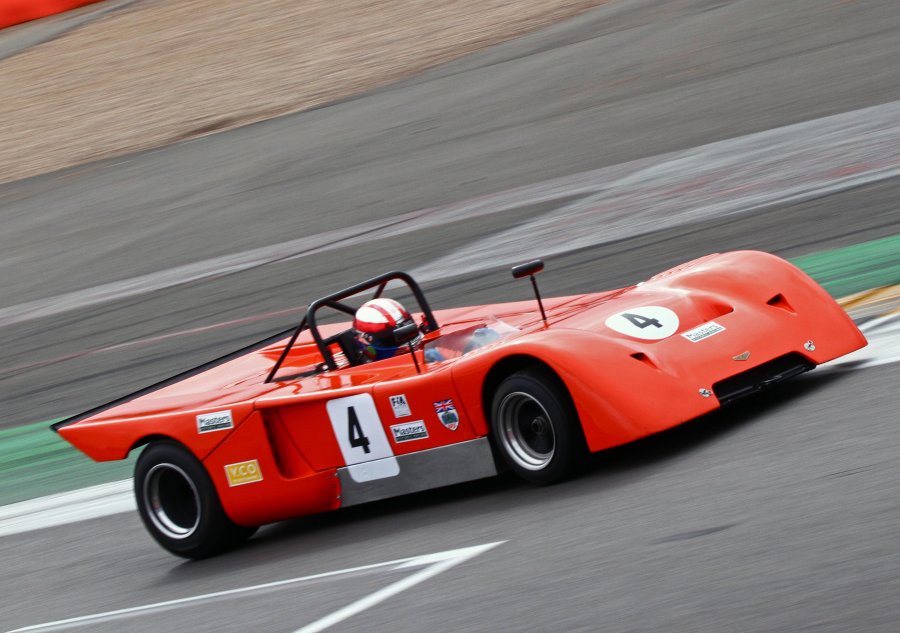 Martin O’Connell led for much of the race but still had to fight hard to claim victory in the FIA Masters Historic Sports Car race at the Silverstone Classic. O’Connell took the lead on lap 1 and was never headed until the pitstops, but having lost time during his stop the Chevron B19 driver soon had Danny Gibson’s Lola T70 Mk3B breathing down his neck.

In traffic, Gibson pounced at Becketts on lap 16 but two laps later more traffic turned the tables on him, Mark Martin’s GRD inadvertently pushing Gibson into the barriers and ending his challenge. One lap later, and with nine minutes to go, the safety car was sent out because of the Paul Pochciol/James Hanson De Tomaso that was left in a dangerous place, securing the win for O’Connell.

“It was hard work, with all the traffic and the oil on track”, said O’Connell, “but it was a good race. I was happy to finish second to Danny but he got stuck in traffic and then I was able to pounce.”

O’Connell quickly moved passed polesitter Paul Gibson into Village on lap 1, but soon had Paul’s son Danny chasing him in another Lola T70 Mk3B. Behind them, Nick Padmore was soon up into third The Nick Padmore/Max Smith-Hilliard Chevron B19 chased down Gibson, Padmore passing the Lola on lap 5, but the two cars touched going into Copse, sending Padmore hard into the barriers. This handed third place to the Rob Garofall/Phil Hall Lola T212, which was converted into second once Gibson was forced to retire after his off.

“Rob [Garofall] did all the hard work”, said Phil Hall, praising his team mate. “I just drove it sensibly to the safety car!”

In the first half of the race, the Max & Andrew Banks McLaren M6B battled with the Michael Gans Lola T290 and the Jason Minshaw/Rob Hall Lola T70 Mk3B, but with Gans retiring on lap 7 and Minshaw/Hall hit with a time penalty, their eventual third place was safe.

Max Banks was equally generous towards his team mate. “Andrew in the first half had most of the work to do. It is so nice to celebrate the debut for an ex-Jo Bonnier McLaren M6B with a podium finish. The car hadn’t raced for 49 years!”

Olly Bryant delivered a storming drive, hauling his Lola T70 Mk3B up to fourth from the 11th row on the grid. A quick pitstop allowed him to jump the race-long battle between the Diogo Ferrao/Martin Stretton Lola T292 and the Chris Beighton/Simon Hadfield T70 Mk3B, which became physical when Hadfield and Stretton bent fenders while accelerating out of the Loop. Initially, Robert Oldershaw’s Lola T212 and the pole-sitting Paul Gibson/Chris Ward T70 Mk3B were part of the battle too but Oldershaw dropped back with bodywork damage while the Gibson/Ward Lola stopped on track only minutes after Ward had taken over the wheel.

The Jason Minshaw/Rob Hall T70 Mk3B was into the mix as well, at the end fighting over fourth place with Olly Bryant, but when it was handed a 5-second time penalty for exceeding track limits the safety-car finish hurt it badly, the pair dropping down from fourth to eighth.

“We were helped by Whitaker’s Lola pulling off on lap 2”, said Ahlers. Billy then pulled out a margin, and I simply maintained that until the safety car.”

David Pittard and Graham Wilson (Chevron B8) won the Bonnier class after the Andrew Kirkaldy/Sandy Watson (in another Chevron B8) challenge evaporated early on. With Wills at the wheel, the Georg Kjallgren/Roger Wills Daren Mk2 closed up near the end, but Wilson hung on for the win.

In a tense Porsche 911 RS battle, Mark & James Bates fought hard with Aaron & Dale Head for the Pescarolo class win. The Bates brothers led almost from start to finish, only headed by the Pochciol/Hanson De Tomaso in the opening laps, but the Heads was never far behind.

Jamie Boot was a comfortable Siffert class winner after Ross Hyett’s similar Chevron B16 went off into the gravel at Copse on lap 2.