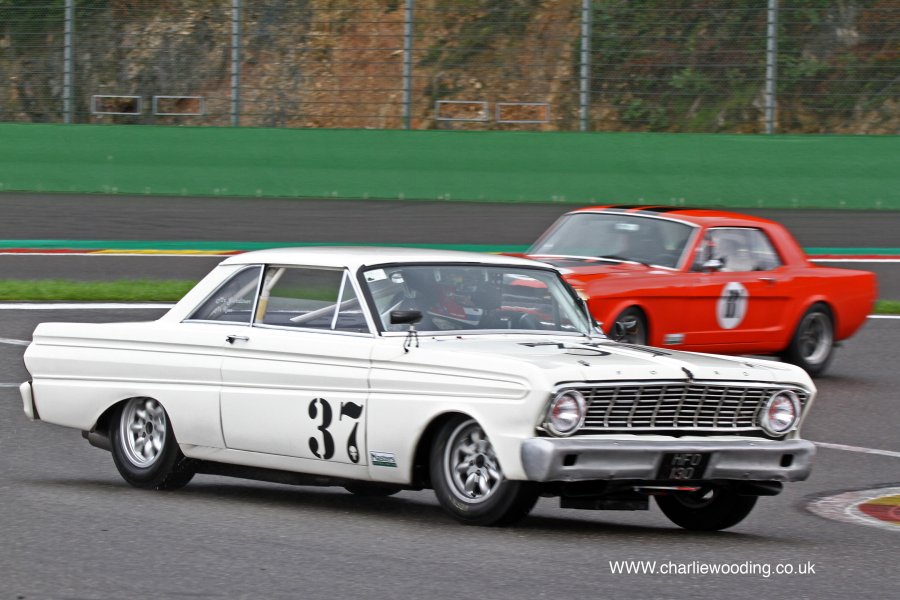 Mike Gardiner and Phil Keen (Ford Falcon Sprint) took the Masters Pre-66 Touring Car spoils at Spa after the first half-hour of the race was run under the safety car due to intense early-morning fog.

The safety-car period lasted into the pit window, all cars pitting at their first opportunity, after which the green flag was waved. Even though Roger Wills (Mercury Comet Cyclone) and Gary Wright/James Littlejohn (Mini Cooper S) had faster pitstops, the pole-winning Falcon was soon back in front, Keen driving away to a clear lead of 21 seconds over Wills at the chequered flag.

“It was pretty lonely once I’d passed Roger”, said Keen, “I was hoping we’d have more of a fight, but it was all straightforward, really.”

“Same here, a bit lonely”, said Wills. “I tried to keep with Keeny, but couldn’t.”

17 seconds down on Wills, Harry Whale claimed third in the glorious Studebaker Lark Daytona after an equally lonely race. The Mustangs of Chris Beighton and Rob Fenn were a distant fourth and fifth, Beighton gaining the place on Fenn on lap 10.

“It was great”, said a beaming Whale. “I lost track with Roger but it was the first time I drove the Studebaker, and I loved every minute of it!”

There was more excitement among the lead Cortinas, as Sean McInerney (having taken over from father Michael) and Andrea Stortoni battled their entire second stint while also catching and passing Robin Ward’s Falcon. On power, Ward charged back up to finish sixth, ahead of McInerney and Stortoni.

“I came out with Andrea”, said the younger McInerney, smiling from ear to ear. “We were literally swapping places pretty much every corner! Then we pushed each other along in order to gain ground on Robin Ward, and we were like mosquitos all over him. Me and Andrea had a good time, that’s for sure!”

“It got a bit complicated at the end when we were catching Ward”, said an equally happy Stortoni, “we were quicker than the V8 but didn’t have the grunt to keep ahead of it. But it was a lot of fun, we had a fair battle.”

Further back, Mark Martin and Andrew Haddon claimed third in class, Haddon having had to fight his way up from the back of the grid while Martin was among the many drivers forced to do their entire stint propped up behind the safety car.

“Perfection!” said a smiling Martin about his time behind the safety car. “Brilliant drive, best I’ve ever done!”

Haddon had slightly more work to do but was his usual phlegmatic self about it. “Oh, we did alright from the back…”

Gary Wright/James Littlejohn led the Mini class for the entirety of the race, starting in third – Littlejohn having shone in wet qualifying – before dropping down the order to finish 13th overall, one place ahead of the Jonathan Lewis/René de Vries car. Mark Burnett and Charlie Birkett/Joe Twyman fought over third place in class, Twyman relieving Burnett from the position on lap 11 before Burnett got back at Twyman on the penultimate lap.