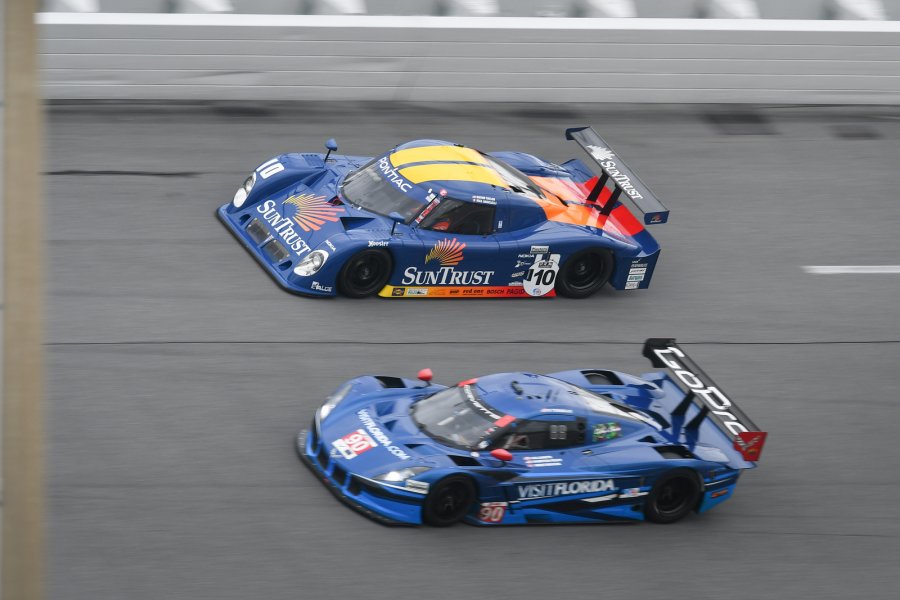 There is a long way to go in the Historic Sportscar Racing’s 2019 HSR Classic 24 Hour and Daytona Historics, underway on the 3.570-mile infield road course on the Daytona International Speedway “oval”, but the first stint for Masters Endurance Legends drivers generally went well – and very well for some of them.

The field, seeded by groups from A to F, are gathered into six separate classes – each will run for 42 minutes, including a mandatory three-minute pitstop, with the next class taking to the track at the top of each hour.

First out was Group E, taking the green flag at 2 p.m. Saturday, with a field of 28. Fastest among the Masters drivers was Craig Bennett in his 2012 Lola B12/80 5000cc, with the number 34 clocking in at 1 minute, 39.094 seconds, good enough for fourth overall in the first hour.
It will be difficult for anyone to top the pace of the two class leaders unless they suffer some sort of a problem – veteran professionals Andy Wallace, in a 2005 Audi R8, finished the hour just over two seconds ahead of Butch Leitzinger in a 2007 Pescarolo Judd.
Fifth overall was Masters driver David Porter, whose 2007 Peugeot 908 5500cc was spun out into the wet grass on the first lap, causing Porter to make a valiant dash up through the field. His best lap was 1:38.411, less than two tenths of a second slower than pros Wallace and Leitzinger.

Among the GT drivers, Charles Nearburg, driving the number 4, 2007 Chevrolet Corvette C6.R 7000cc, was 15th overall. Nearburg was one spot ahead of the number 007, 2013 Aston Martin Vantage GT3 6000cc that will be shared by Marco Werner and Oliver Mathai. Bringing up the rear in last place after the first stint was the number 121, shared by Martin Lauber, Ray Evernham and Dave Roberts. The 2013 Audi R8/LMS 5200cc suffered several issues, including a penalty.

Following Class A, then Class B, was the combined Class C and D, taking to the track at 5 p.m. Masters racers John McKenna and Ross Thompson both logged time in the first hour, dominating the race in their number 10, 2006 Riley & Scott DP Mk II 5000cc with a best time of 1:43.351, about two seconds ahead of the runner-up number 27 of Christophe D’Ansembourg, driving a 2002 Dallara Oreca DO-05 5000cc he will be sharing with Loic Deman.
Thompson was delighted with his first stint: “Great car, great track, great event,” he said, after turning the car over to teammate McKenna. Count D’Ansembourg wasn’t quite as happy with his Dallara – it is equipped with a first-generation sequential gearbox, “and I’m not quite used to it yet,” he said, this being his first time in the car. The balky gearbox “is definitely costing me some time.” The number 88, 1983 March 83G 6000cc of Gregory Thornton and Brad Hoyt, which was very quick in practice, suffered a mechanical issue, and won’t compete.